Well I made it despite the the problems with using my thumb. All 96 Infantry are now completed. The exact units were all present, but I've been selective in the ones I've picked, like the Gloucesters (28th Foot) and the 90th Foot had to be included as they were the only unit with Tarletons. 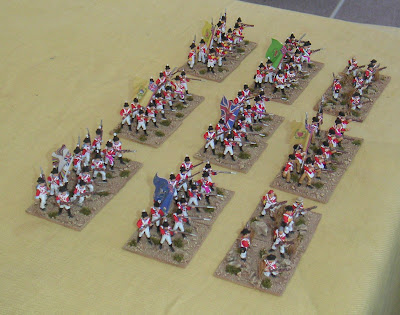 Figures are mainly Strelets British in Egypt plus some Hat marines I was slowly collecting for this project before the Strelets recently came out.

Splendid work Will, that thumb really isn't a handicap at all by the looks of things!

Two base units - that rings a bell!

Paul, the thumbs been a right pain, but I've managed to work around the problem somewhat