Catching up on the backlog before the Christmas festivities.

First off some various French vehicles. At the front a Laffly AMD 80 armoured car that was obsolete so by 1940 it was operating in North Africa, hence the distinctive camouflage scheme. They did however get involved in Tunisia in 1943. Behind is a Laffly V15T 4x4 truck, a lovely model, which like the armoured car is a Cromwell model. Behind are a couple of Renault R35's made by Milicast.

Next is a couple of really superb models by Alby, both of the Somua S35 under original French ownership and the other as used by the Germans. Both only comprised five parts the hull, two track units, turret (including crewman) and an arial.

Finally not quite French, but they did use them late war a M8 Greyhound armoured car by Milicast. I'm still struggling with the ring mount on the M20s. 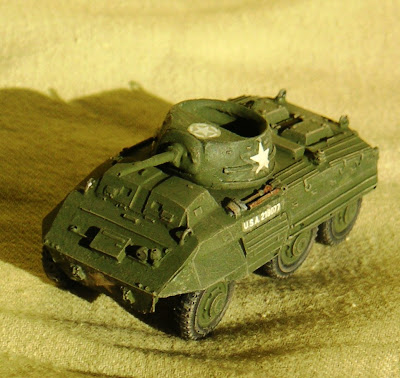 Merry Christmas everyone.
Posted by Fire at Will at 11:59

Nice toys Will - I particularly like the paint job on the AMD armoured car - worth a photo of it's own I think!
Tim

For 1/76 scale very good production and FRENCH vehisles, which I miss by all the 1/72 producers!

Just the last one could be a better moulded adn detailed!

Thanks for the photos and Merry Christmas!