Played the new Crusader Publishing "March Attack" Napoleonic rules down the club last week. They seemed to work well enough and were simple to pick up. We played the Plancenoit scenario in the back of the rules, but it was rather ambitious for a first attempt as the infantry didn't quite get into combat by packing up time. Still it seems promising and worth another go, my only slight concern is that the artillery seems too powerful.

I was using my French and Prussian figures and the few rebased ones really stood out from the rest and the command bases looked particularly uninspiring. So since I was basing up the paras I thought I'd just do these as well 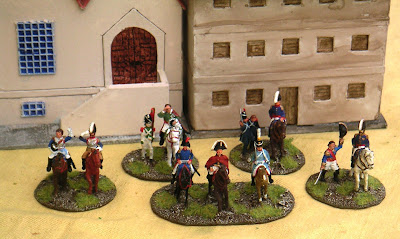 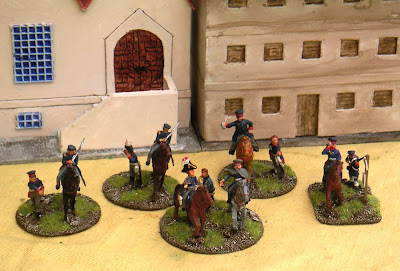 How would you rate the rules, I got the free download too but have not had the chance to look at them yet?

Great work Will, they look fantastic.

Ray, still need to arrange another game, so far certainly worth trying given the free offer to bloggers. I think the key is thinking more at a divisional level rather than unit (battalion)

OMD, how about the Prussian general plus Blucher and Gniesenau?

Ah, I only looked at the French picture. Is the Blucher with the pipe Kennington? i think I have one of those somewhere

Nice work. I've read the rules and think they look good. I'm not ready to rebase my figures from Volley and Bayonet, but am considering trying a game.
Looking forward to your next AAR.

OMD, I thinks it's a Kennington, but I can't quite remember.